Don’t you mean, “Who killed Christ?”

No, what killed him?

* Using other people as objects to be owned, to be used up, to be objects of pleasure.
* Using more of God’s creation than I need when others do not have enough for a decent human life.
* Harming other people to achieve political, economic, ideological, and religious goals.
* Rejecting others in need because they are not like me.
* Not standing up for what I believe to be right and proper.
* Fear of human rejection and ridicule.
* Investing my identity in things, in prestige, in regard, in power, in helping others in prayer, in good works, in absence of pain, in pleasure, in knowledge.
* Carefully calculating my actions to present an image of good works and belief but harboring a heart filled with hate and bitterness
* Not facing up to the consequences of my actions and the inconsistencies in my beliefs and between my beliefs and my actions.

All of this and more–from the most heinous to the overlooked–all of it gathered together from all time,
wrapped around a pulsating core of self indulgence and insensitivity, spinning faster and faster so that it becomes a single, horrible mass, beginning to move through time, faster and faster, gathering to it all the hardness of heart, sucking into itself all that is illusion and delusion, growing larger and harder, speeding its way to Golgotha and nowhere else, far on the horizon, coming faster and faster, too fast to be avoided, reaching its target with the speed and violence of a raging tornado, it rips out the heart, the lungs, the throat, the liver and devours them. 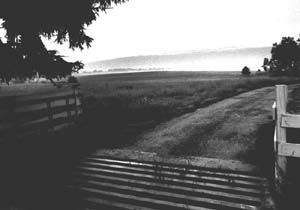